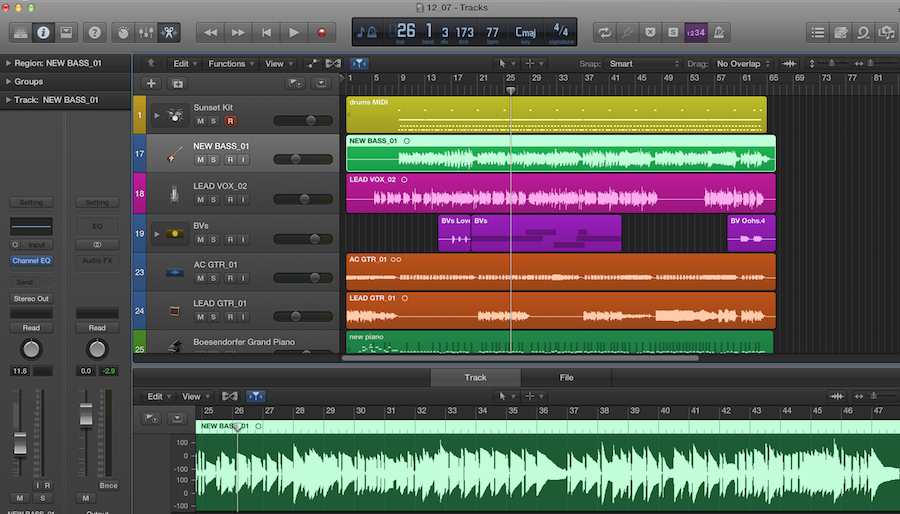 This is a very very long article on Logic Pro learning, based on The “Music Production” course on Coursera. Six sections will be included as listed:

Be aware of the importance about cables and connectors because quality of cables could prevent us from getting noisy voice. many sound malfunction are caused by broken connectors or cables. XLR cable is a standard Microphone cables. And it’s also a balanced cable.

The XLR connector is a style of electrical connector, primarily found on professional audio, video, and stage lighting equipment. The connectors are circular in design and have between 3 and 7 pins. They are most commonly associated with balanced audio interconnection.

The following tables show usage of each pin.

The name “RCA” derives from the Radio Corporation of America, which introduced the design by the early 1940s for internal connection of the pickup to the chassis in home radio-phonograph consoles.

We talk about balance and unbalance in above sections. In telecommunications and professional audio, a balanced line or balanced signal pair is a transmission line consisting of two conductors of the same type, each of which have equal impedances along their lengths and equal impedances to ground and to other circuits. The chief advantage of the balanced line format is good rejection of external noise when fed to a differential amplifier.

It’s interesting to know more detail about cables, since our instructor Prof. Loudon emphasise connector and cables are important and I also have similar experiences when playing with my gears. Beside reviewing some knowledge in class material, I also find something interesting stuffs such as pin function.

Finally, thank you for reading this post and I will be really appreciate if you could post your feedback and help me improve!

This section will cover how to perform important editing tasks in your DAW including: trim, separate, crossfade, merge, grid, cycle, markers, zoom, name and color.

My DAW is Logic Pro X. Maybe you are using a different DAW, but I believe operation would be similar (or, to some extent) for other DAW. Before starting this lesson, I would like to express my favour to using shortcut keys. They could greatly improve efficiency. And I wish you could feel its power during this lesson.

There’s no Trim shortcut keys. Here is how we do a basic triming by mouse.

In Logic Pro, “Separate” is called “Split”. Here is how we do a basic spliting.

This is going to show how to create crossfade for 2 adjacent blocks.

In Logic Pro, one kind of “Merge” are called “Convert to File”

Here’s how we do to repeatly playing a region.

Then we could place the playhead to in the middle of the region and hit space to play this region repeatly and to optimize it.

There is 2 types of Zoom in Logic Pro – Horizontal and Vertical. Here’s the basic zooming techniques.

We introduced some important editing approach in this lesson, most of them could be handled by using keyboard shortcut. Maybe occupational disease for a programmer, I really feel keyboard is my best friend :). Wish this help.

Finally, thank you for reading this post and I will be really appreciate if you could post your feedback and help me improve!

The ability of changing plugin parameters over time make automation a must have skill in musical production.

In the following lesson, I will describe the concept behind dynamic processors and look at the four basic parameter settings related to them.

Dynamic Processors are post-production effects designed to manipulate the dynamic range of a piece of audio. That is, they affect how many decibels there are between the quietest and loudest levels of the output.

Dynamic Processors can either:

While either method can effectively decrease the dynamic range, a compressor or limiter usually brings down the levels above a certain threshold rather than brings up the levels of the quiet parts. This is called DOWNWARD COMPRESSION and is usually what people are referring to when they talk about “compressors.”

Expanders and noise gates usually used to decrease quiet levels. In the case of gates, quiet levels (those that fall below the threshold) are in effect reduced to signal off.

Threshold refers to the level where the dynamic processor starts to function. If audio crosses over this dB value, the other parameters kick into effect.

Ratio refers to how much the level is affected once it has crossed the threshold, expressed as INPUT:OUTPUT. The higher the ratio, the more extreme the dynamic processing.

Attack refers to how quickly the volume fader kicks in once the signal has crossed the threshold.

This is expressed in milliseconds. The lower the rate, the faster the fader will move.
The attack rate controls how much of the transient will be allowed through unaffected by the processor. The transient is the part of a sound where the amplitude changes a lot in a small amount of time, for example at the head of a drum hit.

Release refers to how quickly the volume fader returns to normal once the signal has crossed back from the threshold.

This is expressed in milliseconds [ms]. The lower the rate, the faster the fader will move.

In compression a fast attack can stop the transient coming through, but it can also soften the character of the sound somewhat. A longer attack time allows more of the transient through but means there could be a larger volume peak. On the other hand, a noise gate is usually set with a low attack so that the transient comes through, otherwise the sound would swell in.
If the release time is too long, it can result in a “pumping” sound because the processor hasn’t released before the next input comes in.

The ability of dynamic range make it a very powerful tools because it could help removing unwanted signal which is inevitable during recording, or make the signal flow more stable. Thank you for reading this post and I will be really appreciate if you could post your feedback and help me improve!

In this lesson, I am going to demonstrate tunning the EQ of bass track. Let’s get started! 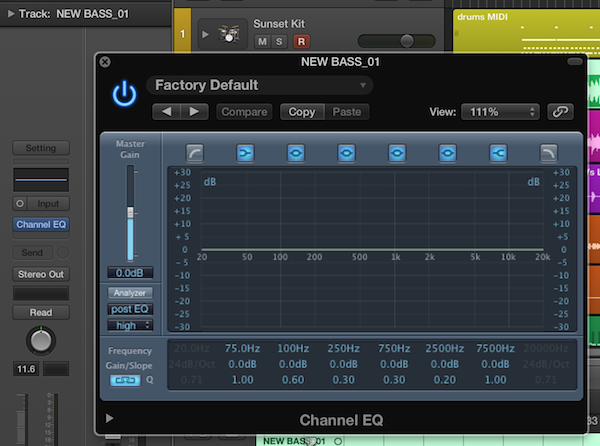 In the panel, we can see:

Here’s what I going to configurate the EQ of Bass:

And here’s the final EQ effect after some other minor tunning by comparing the pre EQ and post EQ. 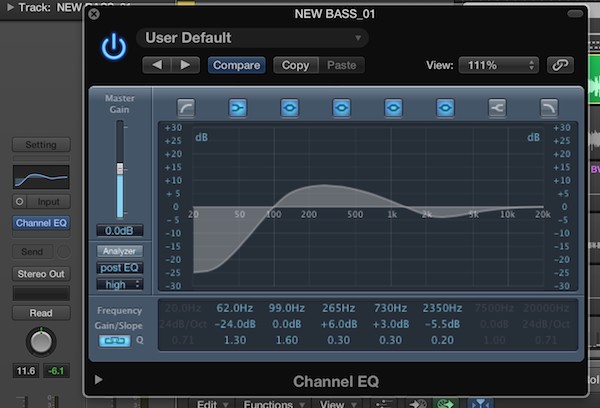 and you could also see the actual EQ curve thumbnail at the bass track channels on the left.

Save as a pre-set

If this setting could be a general one, then we could click the name of setting to save these settings as “bass track EQ”, for example. Or save it as a new default settings, so it could be reused next time

In this lesson we have examined configurating the EQ of a track. It’s very helpful in music production. And it need 2 factors to make this configuration a good one in my opinion:

This note is for week 6 of Introduction To Music Production at Coursera.org. I will be teaching “Explain the usage of 5 most important synthesis module: Oscillator, Filter, Amplifier, Envelope and LFO”.

A sound synthesizer (often abbreviated as “synthesizer” or “synth”) is an electronic musical instrument that generates electric signals which can be converted to sound through loudspeakers or headphones. Synthesizers may either imitate other instruments or generate new timbres. They can be played (controlled) via a variety of different input devices, including keyboards, music sequencers and instrument controllers. And here we will cover modules in a synthesizer.

The Oscillator generates a basic wave (or tone) that is used throughout the synthesis process. Oscillators generate various waveforms: sine, triangle, square, and sawtooth. The sine wave is basically a waveform that is fundamental and has no overtones or partials. The square, triangle, and sawtooth waveforms are capable of producing rich harmonics (partials) to influence the timbre of sound. The oscillator function is to generate a sound for all the other modules in the synthesizer.

After the Oscillator generates the signal it is passed to a filter to remove unwanted partials within a frequency spectrum. This process is called subtractive synthesis because the filter removes unwanted partials. Filters are classified as low pass, high pass and band pass filters. The filter will start functioning when the signal reaches the cutoff frequency.

After filtering, the signal is passed to an amplifier. The amplifier function is to adjust the level or amplitude of the
signal. It also functions as a way to pan the signal from left to right.

The envelope in conjunction with modulation is used to generate a pattern by manipulating the attack, sustain, decay and release of a sound.

LFOs are used to control different parameters or characteristics of a sound in the filter and or amplifier, such as pitch, which many musicians use to explore incredible creativity.

Synthesis is a tool to boost our imagination and creativity when composing electronical music. We talk about the basic of syn but we should be awared that there are different types of systhesis for different instrument and timbre waiting for us to explore. I would suggest ES2 to start with and then select a syn that match one’s need to dive in. For example, UltraBeat for a drummer.

I hope you find this post helpful for review purpose. Thank you for reading this post and I will be really appreciate if you could post your feedback and help me improve.